I know, I know. It’s been a while since I last blogged. And many a thing has changed.

Following another lay off due to injury in April and May, I had decided to not go ahead with my planned Ultramarathons this year. After much discussion with friends, people who I trust, I decided to focus on getting stronger over shorter distances over the summer and work on my form and sorting the wonky mechanics. Give the Ultras a miss for a year and get sorted. Little did I know, as I was coming to this decision, something magical was happening.

Funnily enough the first sign something was different was a parkrun. I had held a steady effort, feeling really good, but had noticed my heart rate was much higher than normal . I’m not one of these with a high max heart rate anyway, but it was showing the max heart rate I can ever get to on hard intervals and speed sessions, not what felt like a stupidly comfortable pace. The heart rate stayed the same throughout that parkrun. Later that day I had a few more episodes of feeling faint when standing up, something was not quite right. Add in to the mix the now very late period, and we realised that maybe, it would be a good idea to rule out pregnancy. I would like to say when we did the test, it was a wonderful, romantic moment. However, it was pee on a stick, followed by childish squabbles over how to hold it whilst waiting for the results, who was going to hold it and how to interpret said result. Of course, when we realised it was positive, it was pure happiness. Maybe a few Oh Shits from me. I know what’s ahead.

So just like that, everything changed. We were expecting a baby. For now, my journey has turned to running during pregnancy. Considering I have been through four pregnancies now, I have never been active during any of them. In fact, the opposite. My running journey didn’t even begin until my youngest was 6 months old. So this, is a whole new thing. I’ll be honest, a daunting thing. Having been there and got numerous tshirts, I know full well how hard pregnancy can be on the body. My pelvis and back have never forgiven me. I also know just how much I rely on running now. Mentally and physically. And my goals. How on earth can I train for a marathon in October. The last one is completely selfish, but we are all human. Selfish thoughts are ok!

Cue searching on the internet for advice, tips, anything to help someone with a bun in their oven wanting to keep to their current active lifestyle. As with any google search, there was lots of conflicting information, outdated information, everything from don’t run to crazy badass pregnancy feats. There is a wealth of information out there but as with we all know when it comes to Dr Google, interpreting and sorting the wheat from the chaff as they say is a tricky one.

What I did learn is that not over exerting yourself is a must. I found this to be true. I have stuck to my usual chest heart rate monitor for accurate readings when running. Wrist based data can be so inaccurate and vary wildly during an activity. Advice used to be for pregnant women to keep their Heart Rate to 140bpm and below. Now its more, keep to a conversational pace. You should be able to talk easily whilst running, cycling whichever your preferred activity is. So, simply put, keep it easy! I have stuck to using a heart rate monitor to keep an eye, as I have found at times my heart rate can increase for my usual easy pace, and because I am running by myself, I lose track of a conversational pace. Obviously if you are huffing and puffing, its a sure sign you’re going too fast. Already I have found that my ‘easy pace’ heart rate equals a slower pace than normal. My heart is already working harder. I have kept it between 140bpm and 150bpm. I have certainly found that if I have pushed it a little more, even as little as 155bpm, I feel fine during the run, but my nausea has doubled for a while following that run.

Talking of nausea, I have struggled with this in a huge way. Best way to describe it as constant motion sickness. Snacking has helped take the edge of this at times. I have actually gained a stone in weight during the first 12 weeks, simply because a constant stream of food seems to keep the worst parts of nausea at bay. Since announcing our pregnancy  I have had a few women message to say they can’t run because of nausea. How can they? In all honesty, you can only take it day by day. Some days, I headed out for a run, only to abort as it didn’t help. I’ve had a couple of runs getting strange looks by passers by as I’ve stopped to heave. Some days, running at a gentle pace, actually helped with the nausea. There’s no magic wand to remove the nausea, you simply have to play it by ear, take each day as it comes. Week 8 was the worst for me. Nausea levels through the roof. It did settle down a little after that.

Tiredness is another factor stopping many from running through the first trimester. It’s ground me to a halt many a time. In fact week 10 and 11 of my pregnancy I practically came to a stop with any kind of training. We shall call them down weeks. It works for me. It can be hard being overcome by tiredness. Especially when you’ve got a family, when you’re used to rushing around like a headless chicken. I stopped berating myself for missed runs pretty early on. Your body is busy creating a little human being. It’s magical. Listen to it, it will tell you what you need. If that’s an extra nap or two, go for it. Have a nap, then go for a walk. Winner, winner.

I have continued with strength training. More so actually. I’m not yet at a stage where I need to adapt it yet, but this will come shortly. I’ve particularly been paying attention to hips and pelvis. The more strength sessions I do, the more hopeful I am that it will help me to continue to run in this pregnancy as long as possible. I really enjoy the strength training, because unlike a run, nothing is different. I still feel strong.

I still raced. Well, when I say raced, I still kept to an easy heart rate. It was very early on when I completed the Liverpool Rock N Roll 5k, and half marathon the following day. I absolutely loved running these, taking the pressure off, and just enjoying a race. Although the nerves of speaking on stage at the runfit expo, certainly did kick up some nausea. My last 10k race, was the same again, keep the heart rate down, which was incredibly difficult on a hilly route. But I loved it. I felt really empowered that day, nausea was behaving, and I felt strong. I just kept thinking, this is great, I feel amazing, my body is incredible growing this little thing and letting me do this at the same time. I think that’s the other thing with running through pregnancy. It is extremely empowering.

So there’s my first trimester in a little nutshell. I’m still planning on running Chicago Marathon in October. I say run. Who knows what will happen between now and then, how my body will cope with an active pregnancy. I’ve had pelvic issues with previous pregnancies, and awful sciatica to boot. No doubt it will rear its head again. But I will be marathon training in the hope of being in one piece come Chicago. Albeit, adapted marathon training. Having spoken to my consultant and midwife regarding everything I have spoken about, and my plans for Chicago, I’m extremely lucky to have their backing and encouragement. Although they do think I’m a bit bonkers wanting to do the marathon, but I will have their go ahead providing nothing pops up.  You probably wont see any ‘sessions’ from me. Well I can tell you now, you won’t.  Just a bucket load of aerobic running and strength. But however I go about it, whatever happens, I’ll be sharing with a weekly update. You lucky, lucky things you! 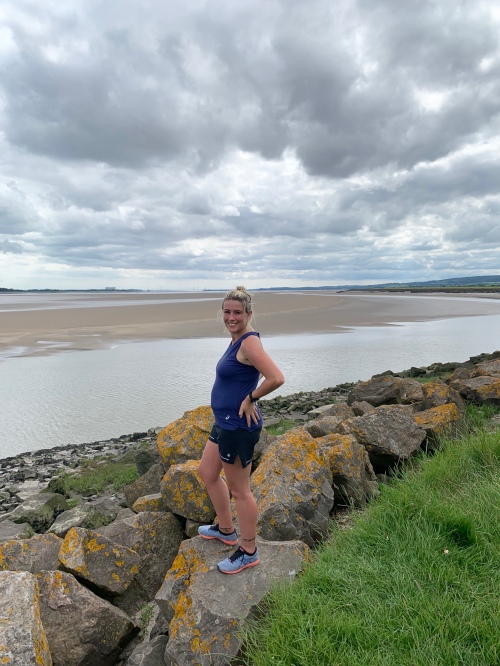 View all posts by kellogsontherun

A rather lovely parkrun this morning after a full on day yesterday travelling and photo shooting 🙌🏼
The past two evenings of running have just been glorious! What a way to close off summer marathon training 😍
AD | countdown to @londonmarathon is on and I am so excited 🤩
Was going to post some positive quote about journeys.. then realised I’m just feeling all kinds of squiffy taper mode. Because it really isn’t calm before the storm. Just a mixture of anxious/excited/hopeful/strangely tired 🤷🏼‍♀️🤣
And welcome to the tough bit of marathon training… just when you feel fit and like it’s all clicking… you have to sit back and do that thing called taper 😳🤣
A big 5k PB… I’ve gone sub 25 🎉